The vast majority of pituitary tumors are benign growths of the anterior lobe of the pituitary gland. Because of their unique location, these tumors generally cause symptoms in one of three ways. Because of the contact with the outer covering of the brain (the dura), they may cause of headaches. Secondly, as they increase in size, they may compress or stretch the optic nerves, which lead from the eyes to the visual centers of the brain. This stretching often causes varying degrees of blindness particularly in the peripheral visual fields. Finally, pituitary tumors can affect the hormonal balance of the body.

The pituitary gland is the master gland and regulates metabolism, sexual function (including menstrual cycles and pregnancy), and growth. If a pituitary tumor causes over-secretion of hormones, the resulting changes in the body can be dramatic and severe. If the tumor causes excess cortisol to build-up in the body, symptoms of Cushing�s Disease develop. Fatigue, muscle wasting, and abnormal changes in body type characterize this condition, named after the founder of American neurosurgery. If a pituitary tumor over-secretes growth hormone and the patient is a child, the patient may grow to abnormal height. If the patient is an adult, excess growth hormone causes a condition called acromegaly, characterized by abnormal growth of the hands, feet, and face. Unhealthy changes also occur in the heart and other organs in the body.

What Causes a Pituitary Tumor?

Genetics is known to play a role in pituitary tumor formation. The incidence of pituitary tumors in increased in patients affected by a syndrome known as multiple endocrine neoplasia (MEN) type 1. This syndrome is follows an autosomal dominant pattern of inheritance and causes tumor formation in the pancreas, parathyroid and pituitary glands.

How Is a Pituitary Tumor Diagnosed?

Pituitary tumors are typically diagnosed with brain imaging. A CT scan of the brain will often demonstrate an enlargement of the pituitary gland and erosion of the bone around the gland and tumor. An MRI of the brain and sella (the location of the pituitary gland) will give superior imaging of the region of pituitary tumor and will usually establish the likely diagnosis. Other types of tumors occasionally arise in this area and need to be considered. These tumors include meningiomas, craniopharyngiomas, and Rathke cleft cysts.

How Are Pituitary Tumors Treated?

Once pituitary tumors become symptomatic, in general, they should be treated. Although a prolactin secreting tumors respond extremely well to medical therapy with bromocriptine or carbergoline, the main treatment for symptomatic pituitary tumors is surgery. Surgery accomplishes a number of goals. Tumor tissue is obtained at surgery and can confirm the diagnosis. Secondly, surgery can remove the tumor tissue and relieve the compression that the tumor puts on the optic nerves and surrounding brain. This decompression can stop and often reverse the visual loss caused by the tumor. Finally, surgery on a hormonally active tumor can decrease and sometimes eliminate the serious negative effects of excess hormone production on the body.

At the SUNY Downstate Department of Neurosurgery, we use state-of-the-art techniques to remove pituitary tumors. In general, the procedure is done using an endoscope, which is a small telescope which is inserted in the nostril while the patient is asleep under general anesthesia. Using computer-assisted guidance, small incision is made in the sinuses which lead to the pituitary tumor. Under direct vision, the tumor is resected. This technique avoids any visible incisions on the head or skull. Potential complications include serious bleeding or infection, but fortunately these complications are rare. In cases of very large tumors, occasionally the endoscopic technique will need to be combined with a craniotomy (opening of the skull) and removal of the tumor with use of the surgical microscope.

There is an important exception to first-line surgical treatment. Certain pituitary tumors manufacture a hormone called prolactin, which normally cause milk-production in women after childbirth. When this type of pituitary tumor develops in adult women, it often causes menstrual periods to stop, abnormal milk production to begin, and problems with fertility. In men, these tumors cause loss of libido and occasionally milk-production from the breasts. These tumors are often identified with MRI of the brain and a blood test for prolactin. Once the diagnosis has been made, the patient is usually started on medication such as bromocriptine or carbergoline. The response of these tumors to these medications is often excellent and will cause reduction in prolactin levels in the body and shrinkage of the tumor.

If there is tumor left over after surgery, this remnant can often be followed with serial brain scans. If the brain and optic nerves have been decompressed, additional surgery may not be necessary even if there is residual tumor. These tumors are often slow growing. Small tumor remnants if there are expected to grow over time can also be treated with very focused beams of radiation called stereotactic radiosurgery. 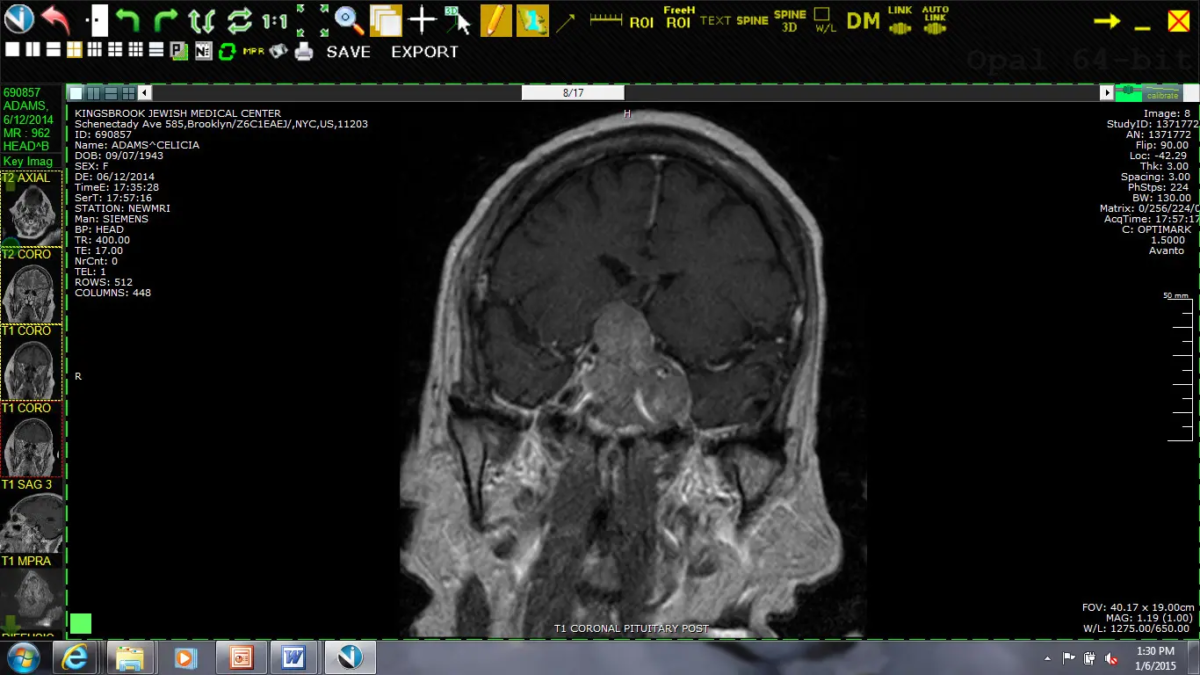 A) Pre-operative MRI of the brain with contrast demonstrating a large pituitary tumor. Pituitary tumors this large frequently compress the optic chiasm resulting in progressive visual deterioration and even blindness. 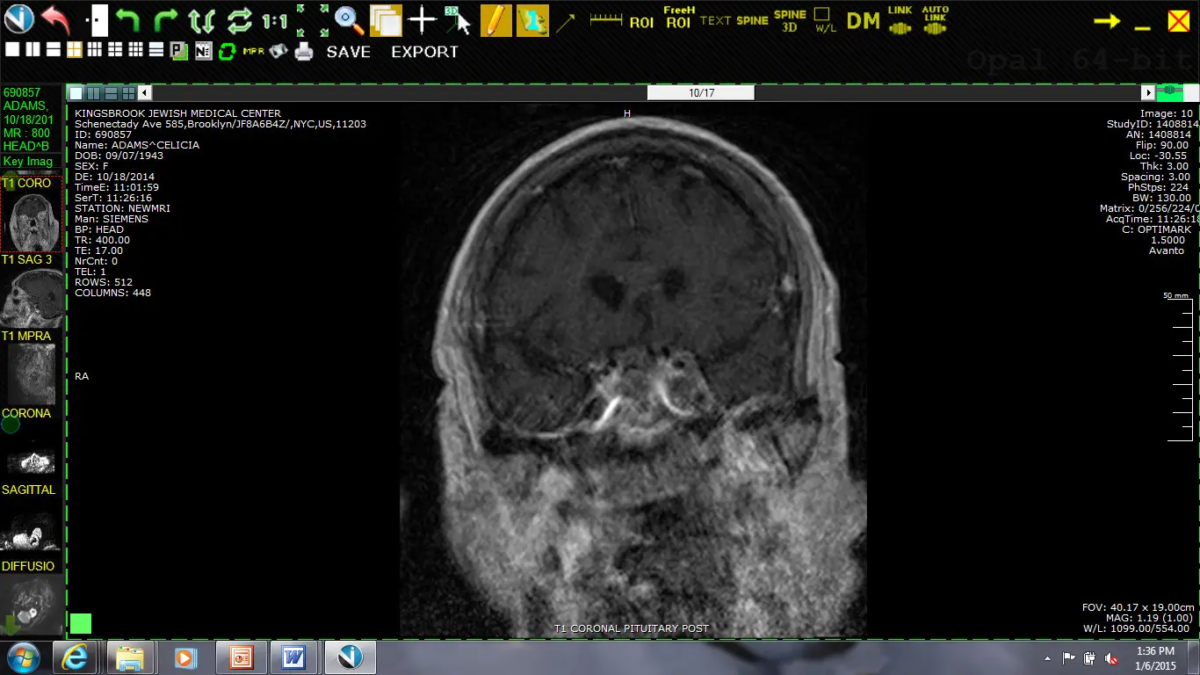 B) Post-operative coronal MRI of the brain demonstrating the surgical resection cavity and resolution of the mass effect on surrounding structures.