AVMs are abnormal clusters of arteries and veins located within the brain or spinal cord. The blood flow in AVMs is abnormal since the blood rapidly flows from a complex of feeding arteries directly into a network of draining veins, bypassing the smaller capillary network of vessels that normally connects the arterial and venous circulations. This abnormal blood flow places significant hemodynamic stresses on the blood vessels and can alter oxygen delivery to surrounding tissues. This can result in significant symptoms in some patients including headaches, seizures, strokes, or life threatening brain hemorrhage.

What Causes an Arteriovenous Malformation (AVM)?

Most AVMs are believed to arise during embryonic and fetal development. Therefore, patients with AVMs likely have had them since birth. For researns that are not well understood, some types of vascular malformations, such as dural arteriovenous fistuas, may develop latter in life and present with similar symptoms.

Some AVMs are discovered by accident when the patient has imaging of the brain and spinal cord for unrelated reasons. Other AVMs are discovered as part of an evaluation for seizures or headaches. Still other AVMs present with a hemorrhagic event. The average risk of hemorrhage from an AVM remains under investigation, but it is estimated to be between 0.5 and 4 percent per year. The future risk of an AVM bleeding is variable and depends on the following features: prior hemorrhage, location in the brain and its anatomic and physiologic characteristic. Each hemorrhage carries an estimated 30-50 percent chance of neurological injury and 10 percent mortality.

The symptoms associated with an AVM such as headaches or seizures can be treated with medications. The definitive treatment for AVMs, however, is limited to surgical resection, neurointerventional occlusion, radiation therapy. Occlusion of the AVM using catheter based endovascular techniques continues to evolve and is usually employed as an adjunct to surgical resection or radiation therapy. When deciding to treat an AVM the risks and benefits must be carefully considered. The risks of treating an AVM are usually related to its size, its location in the brain, and the anatomy of draining veins. These anatomical factors, together with the patient’s age and overall health, must be carefully evaluated on an individual basis to determine what treatment is best suited for a particular patient. Even with this range of available therapies, some AVMs are not amenable to treatment. 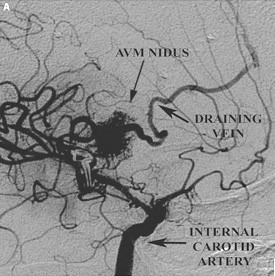 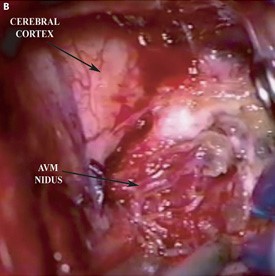 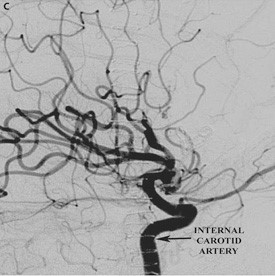